After all these years you think you have seen and done everything in Second Life. Of course that's not true: new places and activities are being invented all the time. One thing that has been around snice 2010 and which I never tried was ski jumping.

Yesterday we had a girls' night out, with the management team of Street Whores and we went to the Chamonix regions to ski jump. The Chamonix area is attached to the oldest mainland in SL, Sansara. 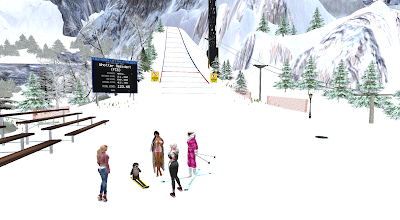 When we arrived we noticed a familiar name on the board already: Whotter... 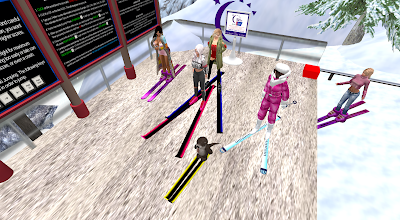 Apparently the little rascal had decided to join in with the 'big league'. His score was pretty impressive too, so he was the favourite at the start.
He flaunted hs first few attempts though, biting... well not dust... snow. That made him quite grumpy, so we heard a lot of cursng and bad words directed at us during the event. 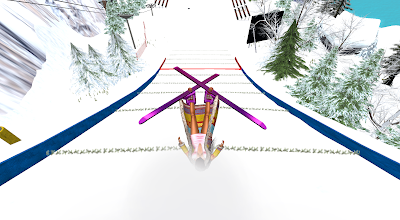 Falling on our backs in the snow was a usual outcome for the jumps. Something tells me that this sport is not for those who haven't practiced. In the end Whotter got himself a second place, which made him happy enough. I will gve the complete results here:

The website http://stats.globalonlinehockey.com/coop/skiJump.aspx gives a nice overview of scores on the ski jump facilty inside Second Life, by the way.
Posted by Tsai Cheng at 5:09 AM No comments:

My blog on a prim

What are two whores doing in the library on a thursday morning? 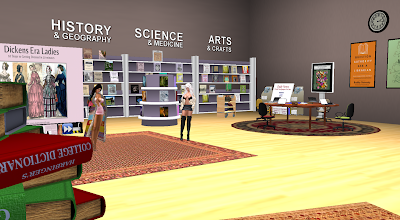 I have been wanting to make my blog readable in-world in Second Life for a long time now. Chrissy said she was going to help me. To do this properly we would need some sort of a script, she said, so we went looking for that.
It's not so hard to find online sources if you do a search for "HTML on a prim" and "Second Life", but it's hard to actually find the information that will get it to work for you. One source told us we should get some sample prims with scripts at the library region, so there we went. 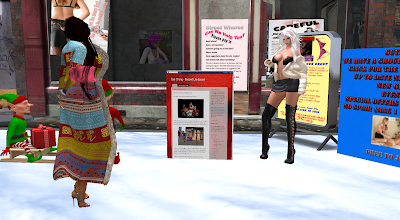 We searched for a while for a place at the Cookie region that was to be names 'hobo' eh... something. I forgot the full name. We didn't find it but in the end Chris did manage to explain to me how I could change the front texture of a box-shaped prim display my blog. It would always be possible to make a proper poster of it later.

If anyone has an idea on how to fix this, do tell me. In the meantime, my blog can be read in the Street Whores Info Center just as well. It's there next to the sign that keeps the colleagues informed about the well-being of Nesliyah, who is recovering from an accident in RL. 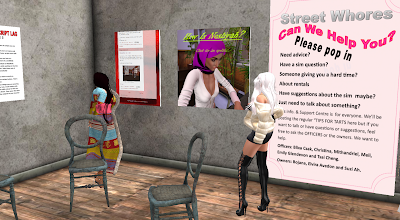 Posted by Tsai Cheng at 3:54 AM No comments:

Yes! Black Friday deals are a thing at Street Whores! 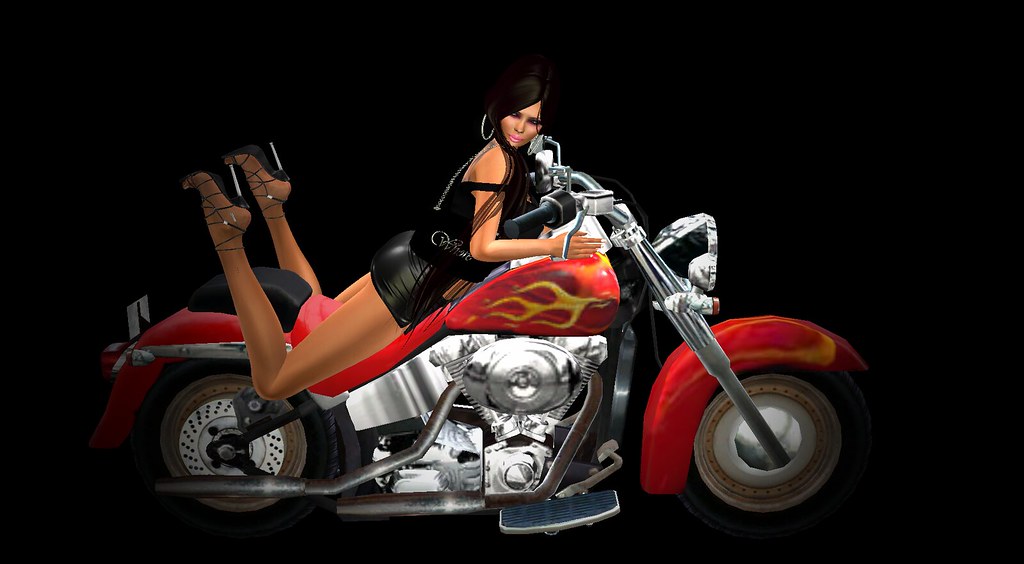 There are deals for the girls: you can make a photo with a motorcycle at Natalie Gem's gallery and across the street Wanda's has a 50% off-titled top and a black handbag as a gift. I picked those up and made a photo on the motorcycle. 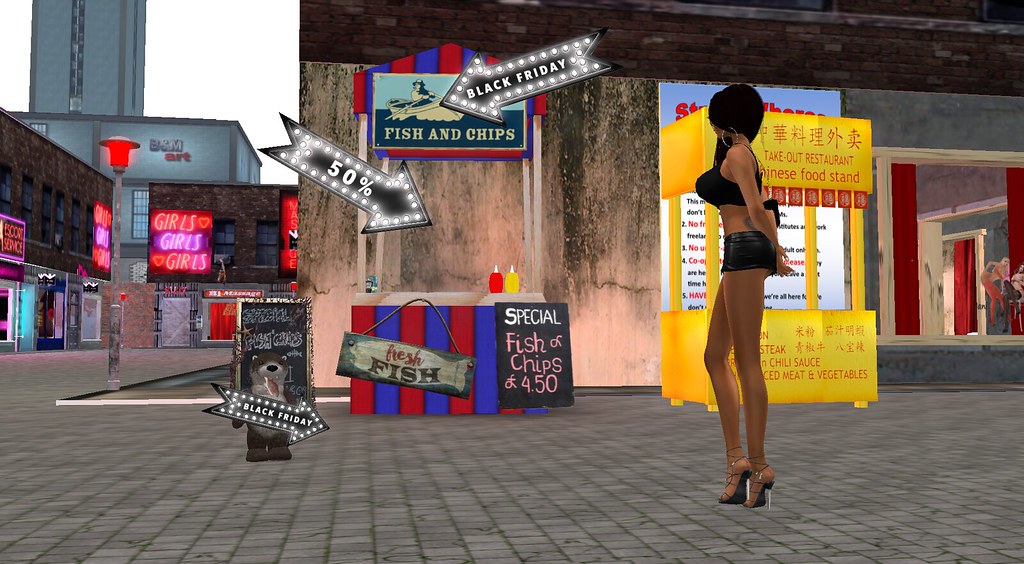 When I continued my walk down the road, I noticed Whotter had also placed some signs: "Black Friday" and "50% OFF". Since he has no real business model I wondered what that meant. Had he already eaten 50% of the fish himself? Or was the fish just for 50% off?

I wouldn't trust it. Best try his fish if you want to poison someone else.
Posted by Tsai Cheng at 3:00 AM No comments:

A little chat on sunday morning 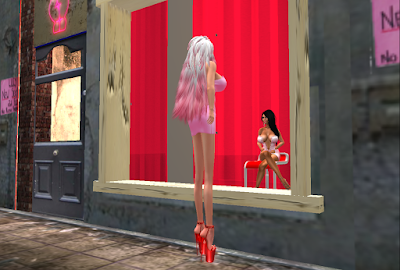 Kath walked by to say hello this morning, just when I was wondering to blog about. Sunday mornings used to be good for business, catching late-night American clients, but it seems lately the American market has dried up here lately, in favour of the European. It might just be a thing of this region...
She mentioned the other place, where I had used her apartment previously. Apparently, some pimp had robbed them of 300.000L$. That's pretty bad. It sounds a bit like the scams and robberies that were all over SL in the old days. To me, it also sounded like someone had been very naive.

So, what else happened the past few weeks? 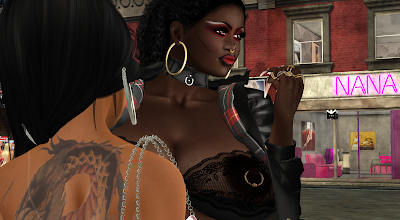 I had a little chat with Rachael, who has left us at Street Whores and is now an owner in another region. She seems to be doing well. I'm happy for that. 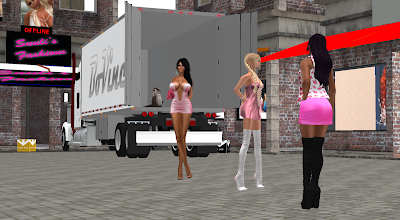 And Whotter showed up with a truck, that he got somewhere to transport his fish. I am not sure where he had bought it, or whether he even stole it, but he was creating quite the havoc with it. I allowed this for a little while, as I hoped he would drive it over the tyre kicker that followed me and Bojana around that day. Unfortunately, the tyre kicker had been smart enough to leave the scene in time...

Violins, foals and fish and chips 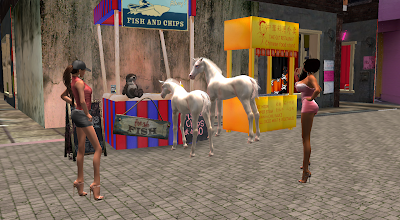 The other day I had a chat with Bo next to Whotter's fish and chips stand. I told bo about my two new odd daughters and brought in the white foals. For the first time, I noticed that Whotter actually liked to see them. He wasn't showing any sign of jealousy anymore. 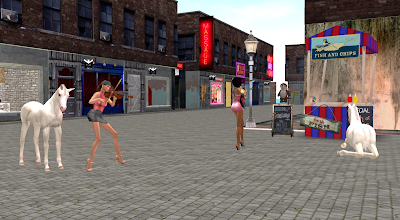 Meanwhile, Bo and I were talking about 'making things happen'. Conctrary to regular video games, a virtual world is a platform, not a place with precooked storylines. This means you rely on your own creativity and that of the people around you to make it fun. Saying "I am bored" actually says a lot about yourself here...
And, oh blast, did Whotter just start feeding the poor foals fish and chips there? Hey, that's not good for horses! Damn Whotter. 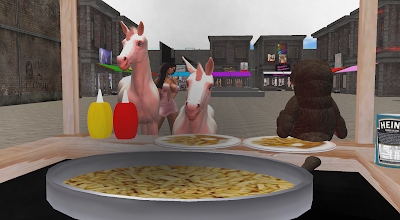 Well, as you may understand it didn't take long before they were completely stuffed with the fatty food and spent the next hour reclining in the middle of the street... 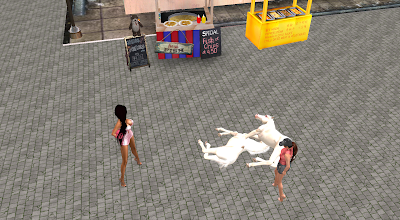 Posted by Tsai Cheng at 3:33 AM No comments: 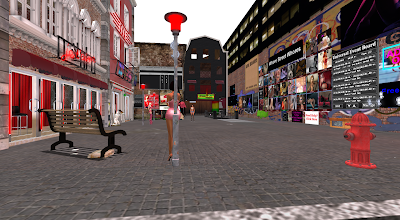 I hadn't really worked in another place for years, except maybe for the Bunny Girl Club, which never really took off. In the past I was at Trashy Whore Trailer Park at times, but otherwise I've been pretty much confined to Street Whores.
But unrest does get a girl on her legs so I decided to take a look around. It wasn't long before I found a place to visit: Whore Street, in Velvet Isle region.

Much to my surprise I even found girls who greeted me and talked back to me when I did. It almost feels like a new experience now. A few men walked in during the first 10 minutes I was there: they said hello too. That's refreshing! 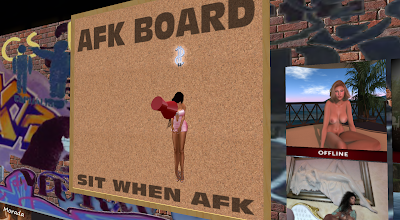 For the AFK girls there was even a special board. And there was actually a manager around that had the task to enforce a no-AFK rule. Well-done! 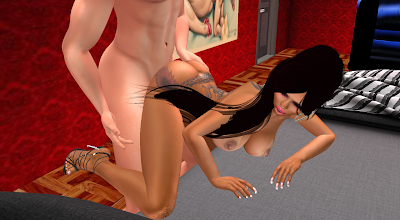 But of course I had no need for the AFK Board. I soon got my ass moving. Quite the morning...

Posted by Tsai Cheng at 2:47 AM No comments: 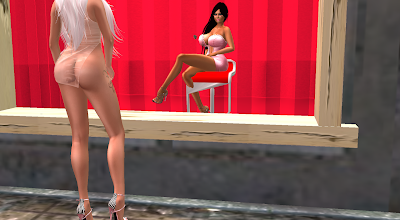 Posted by Tsai Cheng at 1:49 PM No comments:

Hi! My name is Tsai Cheng. I blog about my life as a street prostitute in the virtual world of Second Life. This blog tells you something about my daily wanderings, the places I hang out. Occasionally I model for adult photographers and film makers. I link the results of this in my blog.

Naturally, if you are curious and want to know more or meet me in the flesh.. You can always contact me in-world. I'm not a scary person, but I can be very nice, to many different men (and women, from time to time).